I have been working on a project: making cloth diapers and diaper covers for little Holly. Am I crazy? (Don't answer that.) My mom gave me her old sewing machine awhile back which I convinced Andrew to fix for my birthday; ever since then, it's been up and running and I have been trying to think of new projects for myself. So...diapers!

I want to start out by reminding you of the earlier post and my not-so-awesome diaper wrapping skills. Well, I have had numerous opportunities to practice since then and I am getting way better! 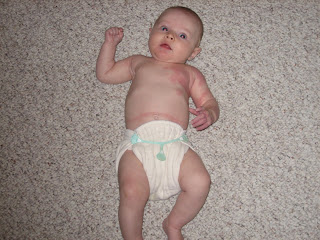 Notice how it's not completely baggy and begging for a leak? Awesome. It's mostly due to the fact that I bought diapers that actually fit, and I'm not using diaper pins anymore. 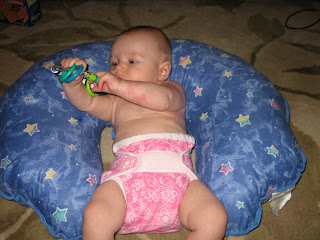 Here is a picture of Holly in a diaper cover that I made. This is version number two. It's kind of messed up a little bit, so that's why the picture isn't too close! I finally got the cover the way I wanted it on the third try. I have made a total of five covers, but a few of them are too big--hence, no pictures. Anyway, I'm really pleased with how they have turned out and I am kind of teaching myself how to sew as I go along. I have always been an okay seamstress, but I'm getting much better now that I have a reason to practice.

Also (as you can see in the picture), Holly is starting to get interested in playing with toys! It's pretty fun to watch. She just started doing that this week. She is getting so much more interactive and fun.

Okay, one last bragging picture of my sewing projects: a diaper that I made last week. I am really proud of this one, because it looks really good and pretty professional (if I do say so myself). 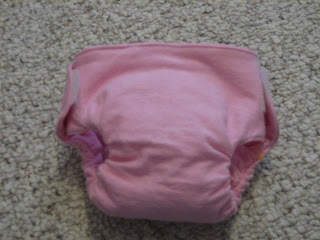 I made this one afternoon while Holly was napping. That's another reason I like making diapers: they come together fairly quickly. I like projects where you can see the results rather quickly. It's very rewarding. This one is also too big for her right now, but hopefully it will fit her soon as I am anxious to see how well it works.

Sewing can be so addicting! Lately, it seems like it's all I think about. But it does give me something useful to do while Holly is napping.

YOU ROCK!! I have wanted to try that but don't have the skillz! I am uber jealous! GO KATIE!! Those diapers are awesome!