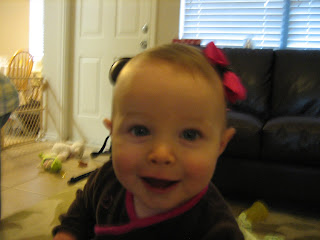 As you may already know, I have a little love affair with bows for my girl's hair. I usually put them on a headband made of panty hose, but as of late Holly has started yanking it off as quickly as I can put it on. But one day, I decided to try just putting the bow itself in her hair. Yay! It stays! Holly has long, luxurious hair compared to mine when I was a baby. I was bald until I was 2 years old. This little girl has apparently inherited her father's thick hair, which I am excited about.

Side note: Sorry this picture is fuzzy. I was experimenting with no flash in poor lighting. As soon as Holly sees the camera out, she puts on a smile and gets as close as she can to the camera.

She gets more and more beautiful, Katie! She is just precious!

This is the cutest picture of Holly!! And I love her bow of course!

Katie, it was so fun to catch up with you folks by your blog!!! Holly is sure a cutie! I feel like I got to know her. thanks!