Last weekend (my birthday weekend), Holly and I joined my parents on a trip to San Antonio to visit with my uncle who was down from Ohio for the week. Poor Andrew was on call and ended up working all weekend, so he had to stay home. We had a great, if very tiring, time. Here are a few highlights from the weekend. 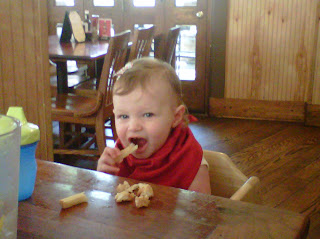 When we went out to lunch on Friday, I forgot Holly's bib in the car (which was very far away, since we were on the Riverwalk). So I used a cloth napkin to make a bandana-bib for her. My little cowgirl! 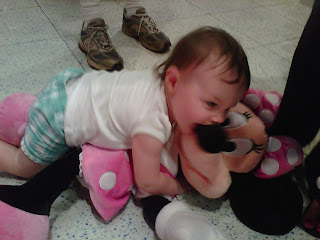 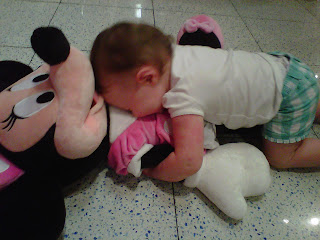 We went to Rivercenter Mall, which has a fairly sizeable Disney Store. Holly went straight for this stuffed Minnie Mouse, which was bigger than she was. She wrestled it to the ground, then dragged it around the store with her, bumping into people and tripping over Minnie the whole way. It was hilarious! But socially unacceptable. (Something very difficult to teach a one-year-old.) 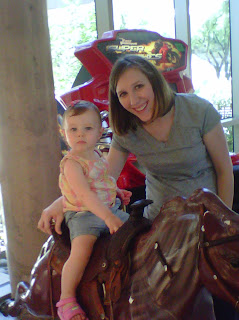 Saturday afternoon we went to HemisFair Park and took the elevator up to the top of the needle thingy. I forget the actual name for it. Anyway, we found this mechanical horse on our way out and decided to let Holly ride it. Don't let this picture fool you; she loved it! I just looked better in this one.

We had a great time visiting with family, but were thoroughly worn out and ready to come home. Thanks for the great time, guys!

Shes gotten so big! I have seen you tons lately but not her. I am suprised to see how big she is! :)