We had not carved pumpkins in several years, so we decided it was high time to change that! Plus, we thought it would be fun for the girls. So a few weeks ago, we passed by a pumpkin patch and decided to stop. The girls each picked out a pumpkin. 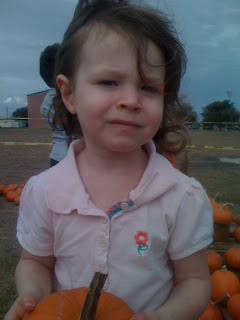 Holly was not amused. I think it's because they had signs everywhere warning of the dangers of picking up pumpkins by their stems. We were cramping her style. 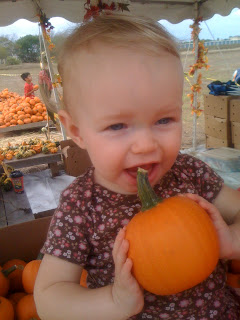 Josie loved her pumpkin so much that she ate it. 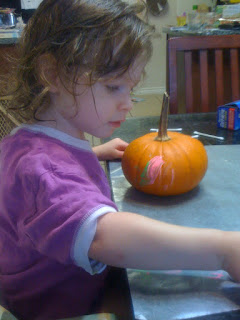 Fast forward to last night: we finally got around to carving and decorating our pumpkins! I did not plan ahead so the girls had neon pink and green paint to decorate their pumpkins, and q-tips for paintbrushes. Holly worked very hard on hers for about 45 seconds. 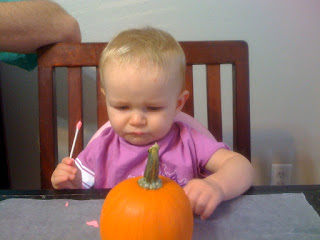 And for some reason, I thought it would be a good idea to give a one-year-old a q-tip covered in paint, thinking that she would surely know what to do with it. Right? It turns out she knew exactly what to do with it...put that pink paint right in her mouth. 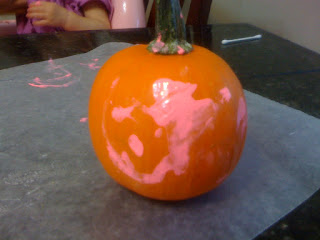 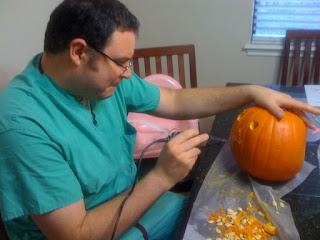 It took Andrew less than five minutes to pull out a power tool to help him carve his pumpkin. Let me just point out that we finished our carvings at the same time: he with his drill, and me with my old-fashioned knife. Just sayin'. 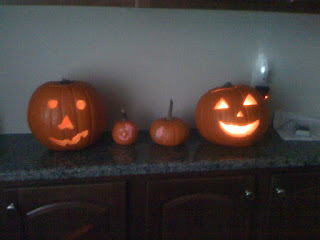 Our little pumpkin family. It has been many, many years since I carved a pumpkin so this was just to get me warmed up. Just wait until next year! Prepare to be impressed.

awww I love them!