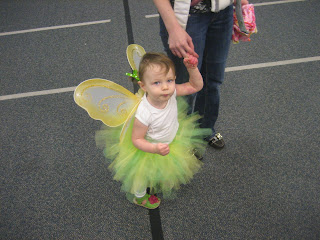 This year, we celebrated Halloween on Saturday by going to our ward Halloween party. I made Holly a fairy costume before Josie was born, so I was eager for her to wear it. She loved wearing the tutu, and I thought she was too cute! She had a great time running around and eating candy and cookies. I was exhausted, but glad we went so Holly could have fun. 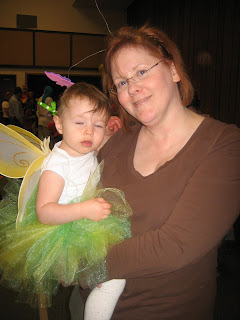 My mom came to the party for awhile, which was awesome because she helped me take Holly around to the different booths. A few of the Young Women did a balloon animal booth, which was really cool! Holly got a flower and was pretty excited about it for about 30 seconds. 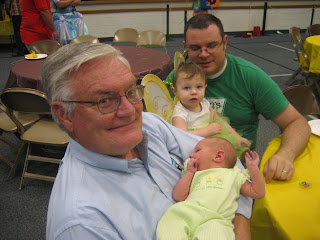 Andrew's sisters Julie and Sherry were in town visiting with their families, so Andrew's parents made it a family affair and came to the Halloween party too. 12 of their 13 grandchildren were there, which was pretty fun! Josie got to spend some quality time with her Grandpa King while we ran around with Holly, which was really nice.
Next year, I'm looking forward to having two kids who will be old enough to trick-or-treat! And will be young enough to go along with a theme costume for the two of them...

Holly's costume turned out so cute! I love it!