On Tuesday, Andrew was lucky enough to get out of work early enough for us to take a little trip to the beach. Our usual spot was inaccessible, so we settled in on another beach. Andrew was crushed that we couldn't drive our car right to our very spot, but I was okay with it. 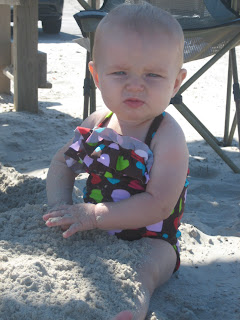 This was Josie's first trip to the beach. She loved it! She was covered in sand from head to toe and ate fistfuls of it, played in the water, and had a blast. 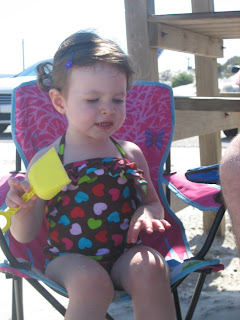 Holly is still not a huge beach fan. She alternated between freaking out because sand was on her feet/hands/leg/face, and wanting to go in the water but being afraid of going in past her ankles. Silly girl! 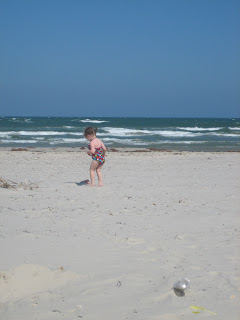 Cute little girl bravely on her way to the water. I just love the pigtails and bathing suit combo! 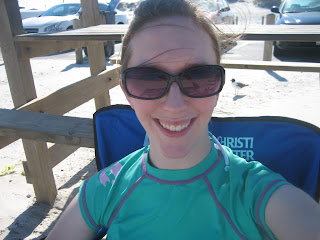 And, because I rarely post pictures of myself, here is one of me at the beach. To tell the truth, I was not thrilled about my white, flabby, misshapen self at the beach either. So I had on knee-length shorts and a rash guard over my bathing suit. I worked up the courage to take the shorts off for about 30 seconds, then they went back on. What can I say? I did buy and use some self-tanner today. Hopefully it will work wonders and make me into a bathing beauty.
0 comments

I love it when we are all at home with nothing planned! It is so fun to just hang out and do what we please. This past Saturday, that's exactly what we did. We decided to go in the backyard and fill up the itty-bitty kiddie pool for Holly to splash around in. 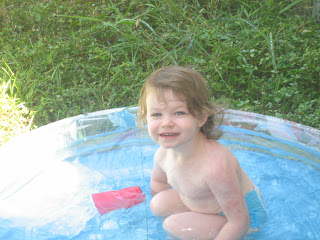 It took a bit of convincing to get her to go all in. It's like she forgets how fun it is between each time she goes swimming. 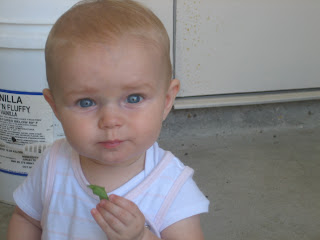 Meanwhile, Josie was content to sit on the patio and attack my basil plants. She hasn't figured out how to crawl yet, but she gets where she needs to go by scooting on her little butt. She can also bend almost completely in half to reach something far away. Quite resourceful. 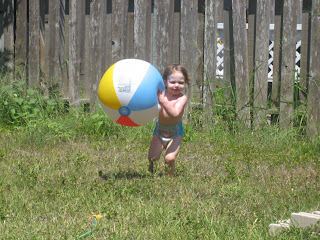 I love this action shot of her running with the beach ball. 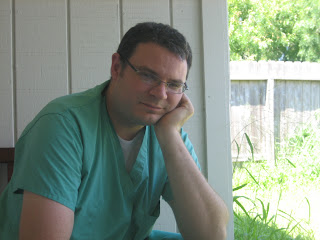 My honey was finally able to join in some lazy day fun! He is usually working or busy on some sort of project around the house or in the garage. We were glad he took the time to hang out with us!
0 comments

Because she is now two, Holly can handle being in the kitchen with me (sometimes). She is my official helper when I'm loading and unloading the dishwasher. She even gets to splash around in the sink sometimes when Daddy's not at home! Today I decided to take advantage of some leftover bananas and chocolate chips and make some frozen banana pops. 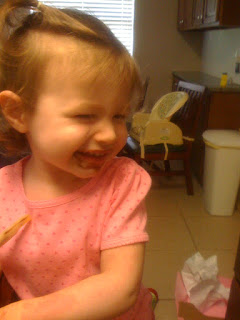 Holly pulled up a chair and we got to work. We covered them in shredded coconut after the chocolate, which was yummy, but have you ever tried rolling them in toffee chips? Oh my goodness. You must! And then I convince myself that it is actually a healthy dessert because it's bananas. 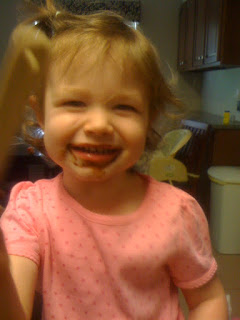 The best part of making the banana pops, by far, was licking up the leftover melted chocolate.
2 comments 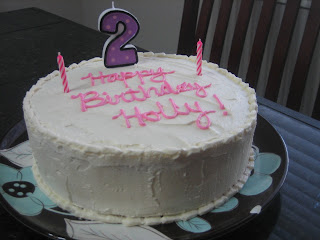 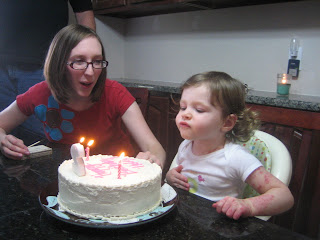 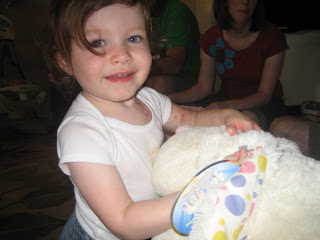 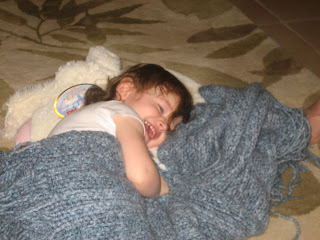 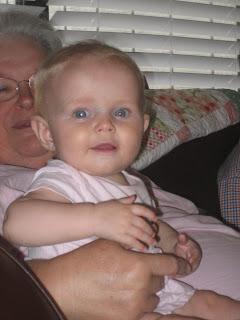 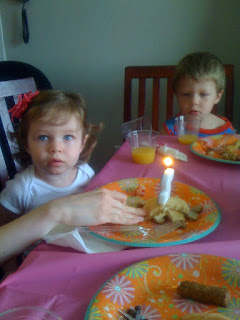 On Monday, we had a little party for a few of Holly's friends. I found the idea for a Pancakes and Pajamas party online, and it was so much fun! We made cereal necklaces, bowled with a miniature bowling set, and ate pancakes and bacon and sausage. The best part was, the party started at 10:00 a.m. and ended in time for the kids' afternoon naps. The worst part was forgetting to hand out the party favors, which are still sitting in their basket in my kitchen, waiting to be delivered to the party guests.
To top it all off, I took Holly in for her two-year well check-up this morning. She is 35 3/4 inches tall (90th percentile) and weighs 27 pounds (50th percentile). We love our sweet girl and are so glad she's part of our family! Even when she throws her two-year-old tantrums.
3 comments

Holly had her third laser treatment today. These are some pictures I took of her this evening after we got home. You probably can't really tell from these pictures, but you can barely see her birthmark on her shoulder/upper body area anymore. 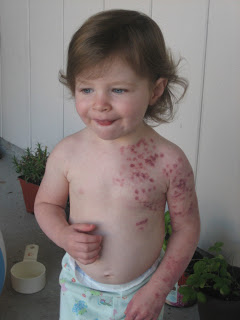 I think that modern medicine is a truly amazing thing! 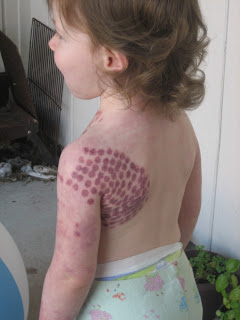 I feel so blessed that we live in a place where we have access to laser treatments, general anesthesia, good hospitals, and wonderful doctors, nurses, and staff members. We are always treated so kindly. 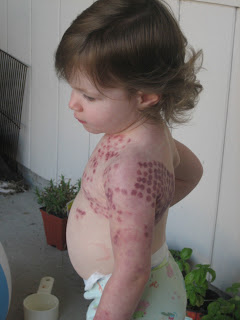 Everything went smoothly today, besides the hiccups naturally created by having a 23-month-old and a 7-month-old who both need their mama at the same time. It is so hard to juggle two very small children at times like this! But we made it through the day just fine, and after a few nights of good rest, we will all be fully recovered.
1 comments

This past weekend, for Memorial Day, we had some little visitors in our house. Namely, Andrew's sister Julie and her family. We had so much fun! We had lots of family get-togethers scheduled. We went to the Lexington and, guess what? The power went out when we were there! Pretty exciting. It was quite the adventure, being in the bowels of that huge ship in the dark.
One of our nephews is almost exactly the same age as Holly--they were born about 2 weeks apart. One afternoon, little Josie was playing on the floor and the two toddlers decided to show Josie how it's done. 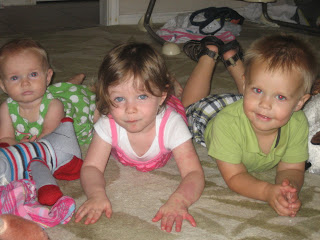 How cute is that? I'm so glad that the little kids are finally old enough to play well together. This little moment on the floor was definitely a highlight of the weekend in my book.
2 comments