Holly loves art projects. I used to be so good at doing them with her, back when Josie was still taking a morning nap. Since Josie dropped her morning nap though, I have gone into crisis mode and have barely resumed functioning as a normal human being again. Thus we have done almost no art projects for the past couple of months. 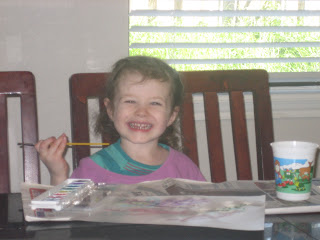 I finally bought a second set of watercolors so Josie could join in on the fun, and we pulled them out one afternoon last week. Holly was thrilled to be back in her natural element of creating and making a giant mess at the same time. 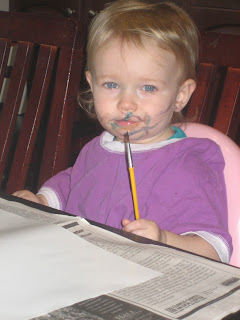 Josie had fun painting on the paper...until she discovered that painting on her face was fun, too. It was everywhere, including in her ears. Painting had to be cut short, and Holly was none too pleased. She let me know by dumping her painting water all over the floor. Fun times.

I laughed out loud when I saw that picture of Josie! So funny!

LOL!!! Of course painting your face is WAY more fun then painting paper!