Last night, Andrew had a brilliant idea: why don't we try cloth diapers for Holly? The thought of spending oodles of money on disposables (especially when the time comes when we have 2 kids in diapers) is not appealing to either of us, especially since I'm not working. I thought it was genius and set to work researching cloth diapers online. This all happened around bedtime, and when I get a new idea I cannot sleep. Therefore, I was up until 1:00 a.m. looking at diaper options.

Early this morning, I went shopping for cloth diapers, diaper covers, and diaper pins. When Holly and I got home, I excitedly put the diapers in the washing machine and did some more online research on how to fold them, wash them, etc. Well, the first problem was the cloth diapers that I bought (the only kind available in South Texas) suck and are totally not absorbant. I found this out after reading several reviews. Oh, great. Well, I decided to try it out anyway. Holly was more than happy to oblige and be my guniea pig. Here was my first attempt: 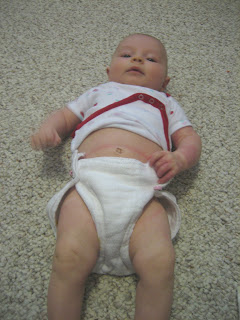 Um, hello? I'm sure you can see the obvious problem here: the diaper is way, way, way too loose! I actually used 2 diapers because they are not very absorbant, thinking that 2 must be better than 1, right? Right? After I folded the diaper nicely I put Holly on it and had to wrap it around her and then fasten it with diaper pins. Uh-huh, that's right. Diaper pins. Which were terrifying because sharp objects and squirmy babies definitely do not mix. I almost had a heart attack when Holly almost grabbed the pin in her fist and then flailed and kicked the entire time the pin was exposed. Once I got the diaper on, I put on the cover and got her dressed. 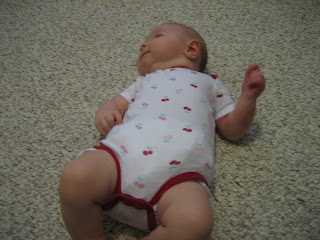 I know this is not a flattering photo of her, but I wanted to emphasize how bulky and silly she looked. I mean, the onesie barely snapped over the two diapers and the cheap plastic cover. (I didn't want to invest too much up front in case things don't work out--if they do, I will get some better equipment.) I laughed out loud when I saw how funny it looked. Then she was in the thing for about 5 minutes and then guess what? She pooped. As you can probably guess, the cloth diaper leaked all over inside the diaper cover, but at least it was contained. Yikes. Anyway, all the rest of the diapers are still in the washing machine so I put Holly back in a disposable diaper for now.

On a happier note, here is a cute picture of the little one: 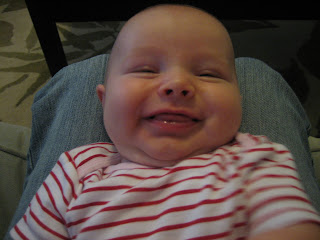 The chubs! I love it!

Cloth diapers are kind of a pain, but I've known people who used a diaper service and were very happy with it. Not sure if one is available here. Holly sure is a cutie!

oh my goodness katie you are amazing. there is no way i would even think about using cloth diapers! you are a much better person then me.

The best way to clean cloth diapers is to pre-rinse them off in the toilet using a Hand Bathroom Bidet Sprayer. So convenient and if you are trying to help the environment (and your pocket book) you can give it a double whammy by virtually eliminating toilet paper use by using it on yourself also. I'm not sure how many people know this but that is what they were originally created for. I think Dr. Oz on Oprah said it best: "if you had pee or poop on your hand, you wouldn't wipe it off with paper, would you? You'd wash it off" Available at http://www.bathroomsprayers.com they come in an inexpensive kit and can be installed without a plumber. Now we're talking green and helping the environment without any pain. One review: http://jonathanandandrea.blogspot.com/2009/04/spray-it-or-scrub-it.html

Wow - you go girl! Let me know how that works out - you are much braver than me! I actually have thought about doing it before, but never took the time to research it and go buy the stuff. Happy diapering!

Just stumbled onto your blog site. I wanted to let you know we are a family of cloth diaper users and you can save in excess of $1,500 a year. We use the system called Gdiapers. I can tell you all about it Katie. My daughter in New York wanted to use cloth as well as in NY there landfills are well lets say far and few. The g-diapering system is a little pricey at first for the set up the outer diaper uses velcro for closures. We use cloth as the inner diaper the prefolds and they fit good and do absorb. Call me if you want to know more. I've been trying to get Toys R Us to stock them but right now HEB does stock them and I have some coupons if you want to try them out I may even have some outer ones for you to have if you want to try it out. You figure "if" your Holly wears diapers even in to her two year old phase that would be aroudn $3,000 for the two year spent in disposables. I also feel since all my kids were cloth diaper users they potty train quicker. Just another persons opinion. You can write me at cgijoerun at g mail dot com. Or call at three six one six six zero eight four four three, how funny is that spelling it all out. Take care and congratulations on your new little one.